Mission accomplished: KKMC Kindergarten celebrates as it prepares to close its doors

Mission accomplished: KKMC Kindergarten celebrates as it prepares to close its doors 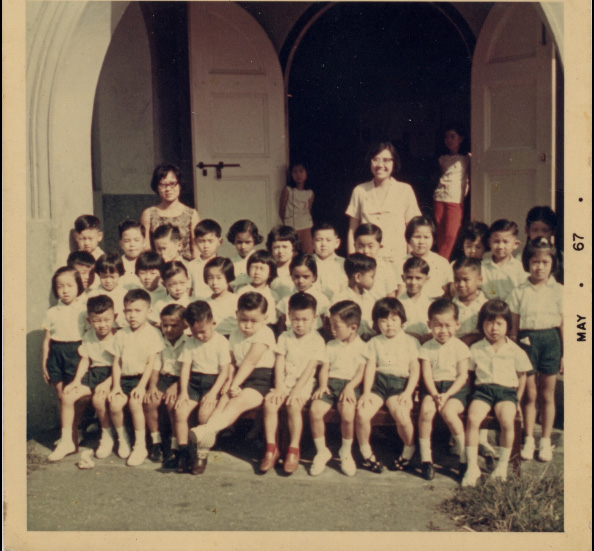 As we approach the final Kindergarten Sunday on 25 Oct and graduation ceremony on 28 Oct, we take a look back at the first church-based kindergarten in Singapore that taught children not only to read and write, but also about God, the bible and the gospel.

KKMC Kindergarten began with a simple act of kindness. A missionary, Miss Liau Nyuk Chin, who was also the church’s organist and Sunday School teacher, noticed that neighbourhood children would play in the playground every day. She decided to gather them, and asked them to come in so she could teach them. This grew into a kindergarten ministry.

When the position of teacher-in-charge was vacated after Miss Liau emigrated overseas, Rev Lau asked a church member, Miss Goh Lee Cheng, who had just completed her Senior Cambridge exam, to take on the role. Miss Goh had not intended to be a kindergarten teacher as she “was thinking of doing something else”, but stepped up to the plate as the kindergarten would have been in danger of closing without a teacher-in-charge.

When Miss Goh took over, the students were being taught in a single class. She decided to divide them into different classes which led to an increase in enrolment. School fees was $25 a month, which included snacks for the children. As part of the church’s outreach to the community, concession rates were offered to needy children while free education was given to needy children whose parents were church members.

A life dedicated to children

The position of kindergarten principal was the church’s pastor by default for the first 17 years of the kindergarten’s operation. However, when Reverend Ong Chaik Ghee retired, he appointed teacher-in-charge Miss Goh as principal. Miss Goh then became KKMC Kindergarten’s third principal and the first principal who was not a pastor.

Miss Goh was just twenty years old when she became KKMC Kindergarten’s teacher-in-charge. She went on to serve in the kindergarten for 41 years, retiring in 1999. During that time, Miss Goh had felt God’s hand guiding her.

On one occasion, she had thought of giving up and doing something else, but “God asked me to carry on, to help the children”, and so she did.

After Miss Goh became principal, she continued with her teaching duties in addition to running the kindergarten. When asked if she was a fierce or lenient principal, she replied, “I was very fierce, or there would be no discipline.” However, she cared for the children very much. To help those that were not good at reading, she would have one-to-one reading sessions by the playground during recess, so that they would not fall behind. Even after she retired, she still thought of the children and cared greatly about the kindergarten.

As the needs of the Kampong Kapor community are now being met by a wide range of childcare and pre-schools options in the neighbourhood, the strong competition has led to very low enrolment in recent years. After much prayer and deliberation, the church leadership made the painful decision in May this year that the Kindergarten would shutter its doors at the end of 2020. When Rev Kenneth Huang shared with Bishop Dr Chong Chin Chung about the Kindergarten’s closure after so many years of ministry, Bishop responded very astutely and encouragingly that the Kindergarten had successfully “accomplished her mission”.

The Kindergarten’s role in the community and in the church

God had a purpose when He used KKMC to start a kindergarten. Many families came to know about the church through the Kindergarten, allowing the church to build relationships with residents in the neighbourhood. The gospel was shared with generations of children who passed through its doors. He planted seeds of faith in the kindergarten children who would later serve in their own way.

Several Kindergarten alums now serve in KKMC either as full-time workers or as active church members. For example, Amos and Jennifer Kwok were in the same class when they attended KKMC Kindergarten and met again in Junior College when another Kindergarten classmate reacquainted them. The connection that they had in kindergarten helped to draw them together and they started dating. The couple later married and serve as KKMC missionaries today, designing bible study curriculum and running bible study classes.

Ps Kenneth said, “The KKMC Kindergarten has reached out to the community and been privileged to be a blessing to the children of families residing in Little India. In fact, when church members visited residents during our ‘Community Blessing Effort’ over the last few years, they would hear from the residents that their children or they themselves had benefited from the education provided by our Kindergarten. This commitment to providing quality pre-school education to children as a ministry has been a hallmark of KKMC. So, even as we bring the chapter on our Kindergarten to a close at the end of this year, moving forward, our church leaders will continue to look into providing such pre-school education in a form that will be suitable and relevant.”

“Kindy was important in my life as it was the start of my attachment to KKMC. I remember Miss Goh Lee Cheng clearly and how much she cared about us. She was strict, however, and used to ask me to stand on the little chair when I was naughty. It was such a long time ago, but my love for the church grew from my time in Kindy and the bond will always be strong.”

“The building was a constant source of fascination and wonder to us kids. There was a spiral staircase just outside the kitchen area that served as a fire exit in those days. However, because it was out of bounds to the students, our imaginative children minds filled the gap with tales of monsters living on the second floor at the top of the staircase. Occasionally, we dared one another to climb to the top to investigate the monsters, and we had to do so before being caught by our teachers and receiving a severe reprimand.”

“Till today, decades after graduating from KKMC Kindy, I still remember the feeling of excitedly coming into class each morning, looking for my wooden name tag in the deep tray of the attendance board and proudly hanging my name up on the steel hook. Somehow, this simple act gave me a warm sense of belonging, and it added to my fond memories of feeling cared for and loved by my teachers each school day.”

“At the start of each school day, we would all stand in a large square in order of height and the teachers would lead us in action songs. There would be much excitement whenever they said we’d sing our favourite song: Heads and Shoulders, Knees and Toes. It’s amazing how I can still remember the words and actions of songs learnt so many years ago.”

More recent times. Image 1: The Cherubim Choir and kindergarten students sang together on Kindergarten Sunday in 2019; Image 2: Kindergarten students handing out love gifts to the migrant workers in the community, which included cookies they baked, May 2019; Image 3: Following the Kindergarten’s SPARKS certification in early February 2020, all staff were assessed and certified at the Early Childhood Development Agency later that month; Image 4: The students enjoyed a lion dance performance at the 2020 Chinese New Year celebrations.