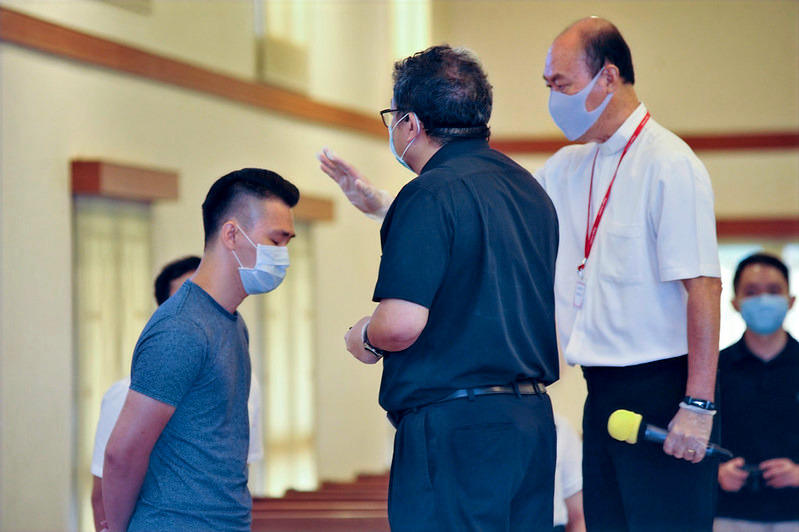 Jason was confirmed as a KKMC member on 2 August 2020

Jason Tan was recently confirmed at KKMC’s Baptism and Confirmation service held on 2 Aug 2020. Read on to find out more about his testimony on how he said yes to God in his youth, and his walk with God ever since.

I am a third generation Christian and I’ve identified as a Christian my entire life. My grandparents and parents grew up in KKMC and so did my siblings and I.

I don’t have a world-changing, touching or moving story to tell unlike many testimonies you hear of non-believers coming to Christ, but nonetheless it still is a story. I grew up in a Christian household – you would often hear my grandparents in their younger days saying prayers at the dining table, praising the Lord for a lovely meal, attending church on Sundays and singing along to hymns recorded on tapes. Back when I was younger, my mum used to play the CDs of Steve Kuban, Marty Nystrom, Don Harris or Don Moen every morning to wake us up for school– it was our daily alarm clock. Also, going to church and attending Sunday school was part of the ritual, it was something we did on Sundays. That’s what I knew it to be as a kid. You don’t really think much about it since that’s what you’re told to do.

Fast forward those years and it was around the time when I was in Secondary school, my LifeGroup leaders were then Young Adults themselves who were guiding us (a bunch of young punks). I don’t remember the circumstances or what led us to the event, but we as a class ended up going for a trip (probably our first outing as a LifeGroup) to the Festival of Praise held at the indoor stadium. I don’t remember much from that night except being exposed to unfamiliar songs by the hottest Christian band around called Hillsong, being in the presence amongst people who spoke in a horribly alien language that made some of us really uncomfortable (I later found out that they were speaking in tongues) and soaking in an environment I have never been in.

The key moment that night was at the end where there was an invitation to make a commitment and a decision. Even though I was about 13-14 years old, I wouldn’t count on me knowing what I was doing at that moment. But something stirred in my heart and soul that made me walk up to the front of the stage area to be led in the sinner’s prayer. There was nothing fancy about it, but I remember the emotion and feeling I felt after. I had this sense of overwhelming peace and joy that was just welling up in my spirit. I remember my mum picked me up and asked me how the entire thing was, and I remember telling her how I felt after, and I couldn’t stop.

On reflection, that was the moment I decided to follow Christ and there was no turning back. I realised that my decision to say yes to God was not based on perfect information, but entrusting imperfection to a perfect God. God needed me to say yes so that He could do the rest.

My journey ever since then has been one of starts and stops through the years of growing up. I have tasted and seen that the Lord is good, but I have also had my fair share of deep dark valleys. I have been in seasons of feeling like you can bask in His glory all day, and I have been in seasons where all you want to do is walk away. But I can testify to this – that the Lord is good and faithful come what may, because I have seen it with my own eyes. He will not forsake those who seek him and there is absolutely no depth too far that His grace cannot reach. The Christian journey was never meant to be easy, but we can walk easy knowing that He paves the way, all we need to do is trust. I struggle with some of these things I have penned down. But the truth is that we are the unbelieving ones and that is part of growing in faith.

Perhaps if I didn’t have God in my life, my life would have turned out very differently. I’m not proud of things that I have done or might have done (thought about them at least). Seeing God work in my life wasn’t about setting up a moral compass but letting the peace and love of God that was shown to me be channelled to others as well.

Our natural inclinations are always toward ourselves: self-protection, self- preservation, self-worth etc. But the Lord has shown me that selflessness, graciousness and generosity, as counterintuitive as they seem in our worldly spectrum – is so much better, and has become a lifestyle for me.

I don’t consider myself being any further than anyone else in this journey despite maybe having a 31-year head start. As I mature and grow older, the challenges of faith become harder and the temptation to fall away becomes stronger and more intense. But through it all, He is steadfast and that is my anchor to which I cling. There are probably a lot more I can talk about, many more critical moments but this is my story and testimony thus far. May all true happiness come to us through Christ alone.