From the Librarian’s Shelf: Five books on Apologetics you should read

From the Librarian’s Shelf: Five books on Apologetics you should read 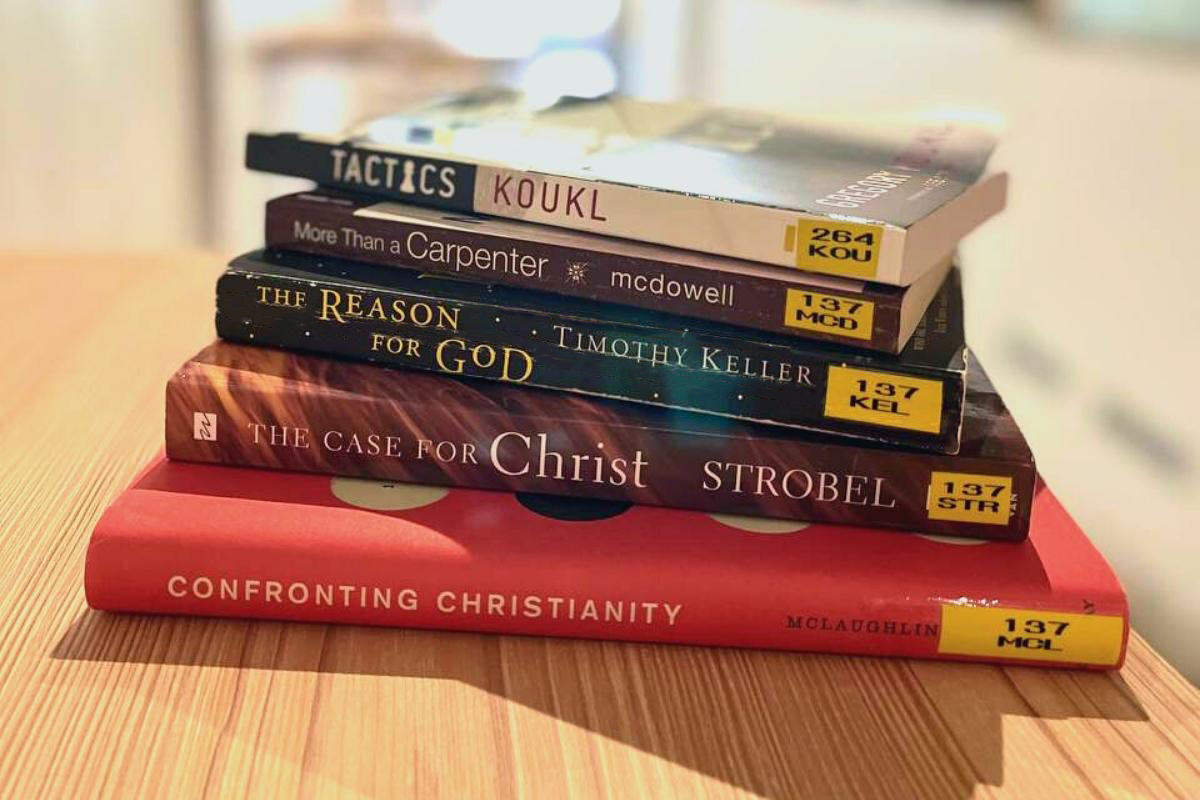 What books do KKMC librarians recommend? What are members of our community reading? Find out at From the Librarian’s Shelf, brought to you by the KKMC Library Ministry.

If you would like to boldly witness and explain the Christian faith to someone who is a skeptic or even to your own family, these 5 books on Apologetics could give you some pointers that you can use in your conversations.

Christian Apologetics is the discipline of explaining Christian believes and practices using logic and reason. Apologetics also helps us to be more rooted in our own faith, in addition to preparing us to be bold witnesses. While the library has many books on Apologetics, we think these 5 books are a good starting point:

1. Tactics: A Game Plan for Discussing Your Christian Convictions by Gregory Koukl

In a world increasingly indifferent to Christian truth, followers of Christ need to be equipped to communicate with those who do not speak their language or accept their source of authority. Gregory Koukl demonstrates how to get in the driver’s seat, keeping any conversation moving with thoughtful, artful diplomacy.

You’ll learn how to maneuver comfortably and graciously through the minefields, stop challengers in their tracks, turn the tables and—most importantly—get people thinking about Jesus.

2. The Reason for God: Belief in an Age of Skepticism by Timothy Keller

Timothy Keller addresses the frequent doubts that skeptics and non-believers bring to religion. Using literature, philosophy, anthropology, pop culture, and intellectual reasoning, Keller explains how the belief in a Christian God is, in fact, a sound and rational one.

To true believers he offers a solid platform on which to stand against the backlash toward religion spawned by the Age of Skepticism. And to skeptics, atheists, and agnostics he provides a challenging argument for pursuing the reason for God.

3. The Case for Christ by Lee Strobel

Lee Strobel, former legal editor of the Chicago Tribune, cross-examines a dozen experts with doctorates who are specialists in the areas of old manuscripts, textual criticism, and biblical studies.

Strobel challenges them with questions like How reliable is the New Testament? Does evidence for Jesus exist outside the Bible? Is there any reason to believe the resurrection was an actual event?

Strobel’s tough, point-blank questions make this bestselling book read like a captivating, fast-paced novel. But it’s not fiction. It’s a riveting quest for the truth about history’s most compelling figure.

4. More Than A Carpenter by Josh McDowell

The story that could change your life. Skeptic Josh McDowell thought Christians were out of their minds. He ridiculed and insulted them, then decided to combat them with his own thorough research to disprove the claims of Jesus Christ.

To his surprise, he discovered that the evidence suggested exactly the opposite-that Jesus, instead of being simply a first-century Hebrew carpenter, truly was the God he claimed to be.

Addressing 12 controversial issues about Christianity – the Bible’s teaching on gender and sexuality, the reality of heaven and hell, and more – this book shows how current psychological and scientific research actually aligns with teaching from the Bible.

What our community is reading

The Reason for God: Belief in an Age of Skepticism by Timothy Keller

“In this book, Keller states that we all have doubts and questions, and that we do ask ourselves this, ‘Why do I believe?’

Dealing with doubts honestly is the best possible way to develop a faith that can last in the face of anything. As such, you need to look at the reasoning for God whether you are a believer in God or if you do not believe in God. Keller does not try to ‘prove’ Christianity or that God exists, and he candidly emphasises that no one can do this. Instead, he focuses on the nuances and makes balanced arguments to provide a rationale for belief in God.

I personally enjoyed the first half of the book: ‘The Leap of Doubt’, where Keller addresses the various issues that might lead to doubts, from the arguments of well-known atheists such as Richard Dawkins and hard truths regarding some of the historical failures of the church and character flaws found in many believers. Addressing and discussing such issues is a critical first step before the move to the second half of the book: ‘The Reasons for Faith’, where Keller focuses more on the Christian faith, which includes interesting analogies and discussion points on sin, forgiveness, and love.

This is must-read book for Alpha facilitators/helpers and believers who are answering the call to be a bold witness, as Keller eloquently walks through many of the most common questions and concerns that are asked by believers and non-believers alike, and clearly presents the soundness of the logic behind the truth in a rational, reasoned and unconfrontational way. And so, this book will help to better equip ourselves when having dialogues with non-believers or new-believers.”

– This book review was contributed by Lyndon Heng. Lyndon attends the 10am Worship Service.

Interested in reading one of these books on Apologetics? Reserve the book here or drop by our library on Sundays, 9.15am to 10am, at KKMC L2.